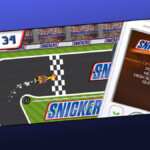 The Chocolate bar Snickers’ nordic summer campaign 2010, was developed around the Formula 1 mobile game: Snickers Peanut Power RACE – developed by PortaPlay. The players compete in the 2010 edition for a trip to France, where they can drive a Formula 1 car themselves. Besides the mobile solution, Portaplay delivers a highscore feed for the home pages. snickers.dk snickerschoklad.se snickersbar.no as well as a number of interactive banners, with the possibility to key in your mobile number directly in the banners around various ad networks. The game was downloaded 64.000+ times in Denmark and was at the time the most downloaded advergame. (until it was overtaken by our own Donald Duck game the year after, made for Serieforlaget).